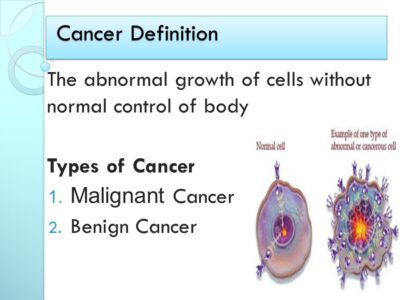 November 7 is observed annually as National Cancer Awareness Day in India to raise awareness about cancer, of which 1.1 million cases are reported in the country each year. National Cancer Awareness Day was first announced in September 2014 by then Union health minister Dr Harsh Vardhan, with November 7 chosen for the occasion to coincide with the birth anniversary of Nobel laureate Marie Curie, who was born on this date in 1867, and whose works led to the development of radiotherapy to treat cancer.

Cancer is a class of diseases characterized by out-of-control cell growth. There are over 100 different types of cancer, and each is classified by the type of cell that is initially affected.

Cancer harms the body when altered cells divide uncontrollably to form lumps or masses of tissue called tumors (except in the case of leukemia where cancer prohibits normal blood function by abnormal cell division in the blood stream). Tumors can grow and interfere with the digestive, nervous, and circulatory systems and they can release hormones that alter body function. Tumors that stay in one spot and demonstrate limited growth are generally considered to be benign.

A cancerous cell manages to move throughout the body using the blood or lymphatic systems, destroying healthy tissue in a process called invasion-that cell manages to divide and grow, making new blood vessels to feed itself in a process called angiogenesis.
When a tumor successfully spreads to other parts of the body and grows, invading and destroying other healthy tissues, it is said to have metastasized. This process itself is called metastasis, and the result is a serious condition that is very difficult to treat.
Normal cells in the body follow an orderly path of growth, division, and death. Programmed cell death is called apoptosis, and when this process breaks down, cancer begins to form. Unlike regular cells, cancer cells do not experience programmatic death and instead continue to grow and divide. This leads to a mass of abnormal cells that grows out of control.
Carcinogens are a class of substances that are directly responsible for damaging DNA, promoting or aiding cancer. Tobacco, asbestos, arsenic, radiation such as gamma and x-rays, the sun, and compounds in car exhaust fumes are all examples of carcinogens. When our bodies are exposed to carcinogens, free radicals are formed that try to steal electrons from other molecules in the body. Theses free radicals damage cells and affect their ability to function normally.