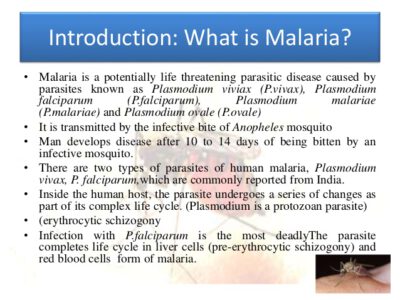 World Malaria Day is an occasion to highlight the need for continued investment and sustained political commitment for malaria prevention and control.

The theme for this year’s Malaria Day is”Harness innovation to reduce the malaria disease burden and save lives’.

Malaria is a life-threatening disease caused by parasites that are transmitted to people through the bites of infected female Anopheles mosquitoes. Malaria is an acute febrile illness.

Malaria is caused by Plasmodium parasites. The parasites are spread to people through the bites of infected female Anopheles mosquitoes, called “malaria vectors.” There are 5 parasite species that cause malaria in humans, and 2 of these species – P. falciparum and P. vivax – pose the greatest threat.

Falciparum is the most prevalent malaria parasite on the African continent. It is responsible for most malaria-related deaths globally.

Vivax is the dominant malaria parasite in most countries outside of sub-Saharan Africa.

India is one of 15 countries in the world to have the highest cases and deaths of malaria, the World Health Organisation’s 2017 World Malaria Report revealed.The report put India along with 14 countries from the Sub Saharan African region, with 80 percent of the world’s cases and deaths.

Nigeria bore the highest burden in the world, as it topped these 15 countries with 30 percent of the deaths. Four African countries accounted for just over half of all malaria deaths worldwide: Nigeria (31.9%), the Democratic Republic of the Congo (13.2%), United Republic of Tanzania (4.1%) and Mozambique (3.8%).

India’s health ministry has projected that India will be malaria-free by 2030. The health ministry has announced plans to ensure “zero indigenous cases and deaths due to malaria for 3 years,” in order to gain the malaria-free status by 2030. National Strategic Plan for Malaria Elimination (2017-22) was launched by the Health Ministry in July, 2017 which laid down strategies for the next five years.

As per the World Health Organization (WHO) the World Malaria Report 2021, India was the only high burden country to record progress by sustaining a reduction in malaria burden between 2019 and 2020. However, the rate of decline was slower than before the pandemic, the WHO report stated, with the country still sharing over 80 per cent of the malaria burden of South-East Asia.