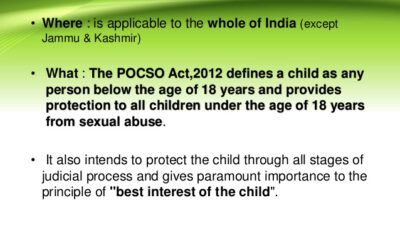 The Supreme Court(SC) quashed two judgments of the Nagpur bench of Bombay High Court which ruled that it will not amount to an offense of sexual assault under Section 7 of POCSO if there is “no direct physical contact, i.e. skin to skin” between the accused and the victim.

The SC ruled that the most important ingredient for constituting an offense of sexual assault under Section 7 of Protection of Children from Sexual Offences (POCSO) Act is the “sexual intent”, and not the “skin-to-skin” contact with the child”.

The court ruled, the “act of touching the sexual part of the body or any other act involving physical contact, if done with ‘sexual intent’, would amount to ‘sexual assault’ within the meaning of Section 7 of POCSO Act”.

To deal with child sexual abuse cases, the Government has brought in a special law, namely, The Protection of Children from Sexual Offences (POCSO) Act, 2012.

Law provides for the protection of children from the offences of sexual assault, sexual harassment and pornography, including penetrative and non-penetrative assault.

The law safeguards the interests of the child at every stage of the judicial process by incorporating child-friendly mechanisms for reporting, recording of evidence, investigation and speedy trial of offences through designated Special Courts. The said Act defines a child as any person below eighteen years of age.

The said Act prescribes stringent punishment graded as per the gravity of the offence, with a maximum term of rigorous imprisonment for life, and fine.

The Act was amended and It increased the minimum punishment from seven years to ten years. It further adds that if a person commits penetrative sexual assault on a child below the age of 16 years, he will be punishable with imprisonment between 20 years to life, with a fine.

The amendment adds two more grounds to the definition of aggravated penetrative sexual assault. These include: (i) assault resulting in death of child, and (ii) assault committed during a natural calamity, or in any similar situations of violence. Currently, the punishment for aggravated penetrative sexual assault is imprisonment between 10 years to life, and a fine. It also increases the minimum punishment from ten years to 20 years, and the maximum punishment to death penalty.

New rules as notified in March 2020 include provision of mandatory police verification of staff in schools and care homes, procedures to report sexual abuse material (pornography), imparting age-appropriate child rights education among others.

For crackdown on child pornography, the rules state that “any person who has received any pornographic material involving a child or any information regarding shall report the contents to the special juvenile police unit (SJPU) or police, or cyber crime portal.

Any institution housing children or coming in regular contact with children, including schools, creches, sports academies or any other facility for children must ensure a police verification and background check on periodic basis of every staff.