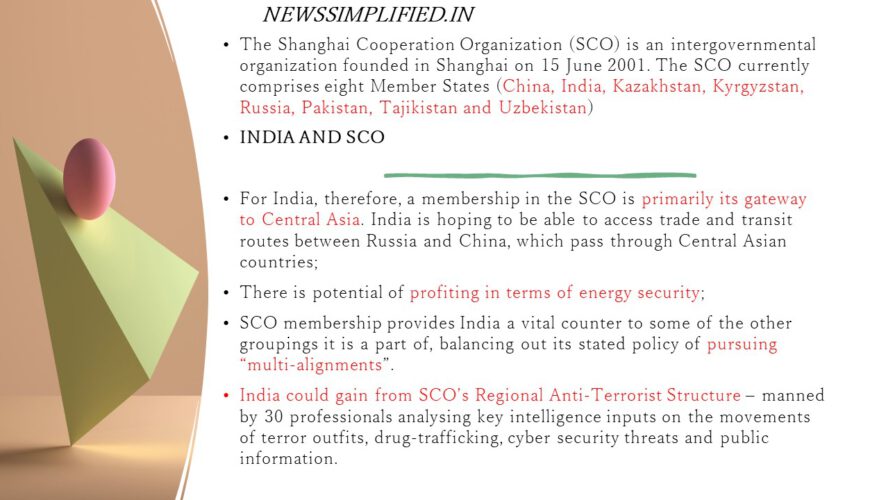 The Samarkand declaration advocated “commitment to peaceful settlement of differences and disputes between countries through dialogue and consultation”.

The declaration stressed that the principles of mutual respect for sovereignty, independence, territorial integrity of States, equality, mutual benefit, non-interference in internal affairs, and non-use or threat of use of force are the basis for sustainable development of international relations.

The member countries are planning to develop common principles and approaches to form a unified list of terrorists, separatist and extremist organizations whose activities are prohibited on the territories of the SCO member states.

India stressed the SCO to develop reliable and resilient supply chains to offset the disruptions caused by the Covid-19 pandemic and the Ukraine crisis and said stressed for connectivity and granting “full rights” of transit facilities by member states is important to achieve the goal.

Tourism: Varanasi was declared as the SCO Tourism and Cultural Capital for 2022-2023 to promote the rich cultural and historical heritage of the people and the tourism potential of SCO member states.

SCO, pan-Eurasian grouping, is a consortium of select Asian nations that focuses on security and trade. The SCO has eight member countries which represent around 42% of the world’s population and 20% of the global GDP.

The SCO emerged from Shanghai Five (China, Russia, Kazakhstan, Kyrgyzstan, Tajikistan) which was founded in 1996 after demarcation of China’s borders with the four newly independent States that appeared after collapse of the Soviet Union in 1991. This was transformed into today’s SCO with the induction of Uzbekistan as a new member at the Shanghai summit in 2001.

India, along with Pakistan, assumes full membership of SCO during Summit meeting in Astana (2017), Kazhakstan. They became seventh and eighth members of the SCO. India was admitted into the SCO as an observer at the 2005 Astana Summit along with Iran and Pakistan.

In 2021, the decision was made to start the accession process of Iran to the SCO as a full member, and Egypt, Qatar as well as Saudi Arabia became dialogue partners.

Since its inception in 2001, the SCO has mainly focused on regional security issues, its fight against regional terrorism, ethnic separatism, and religious extremism. To date, the SCO’s priorities also include regional development.

The SCO region covers almost 60 percent of the Eurasian landmass, with over 1.5 billion people included in its population, including some of the world’s leading energy-rich nations. So, its importance is likely to grow in the coming years.

India’s growing stakes in Central Asia too are well-recognized. For India, therefore, a membership in the SCO is primarily its gateway to Central Asia. India is hoping to be able to access trade and transit routes between Russia and China, which pass through Central Asian countries.

Joining the SCO will be a welcome diplomatic boost to India’s efforts to connect with Central Asia.

Central Asia is part of India’s extended neighbourhood.
India’s membership in the SCO will provide a welcome opportunity for India’s leadership to meet with their counterparts from Central Asia, Russia, China, Afghanistan, and others regularly and frequently.

India’s potential participation in the Eurasian Economic Union (EEU) will be an added advantage to make this partnership more fruitful.

On the security front, the SCO remains committed to fighting the so-called “three evils” of terrorism, separatism, and religious extremism. Here too there is much room for cooperation, as India has been a victim of terrorist attacks.

There is potential of profiting in terms of energy security.

SCO membership provides India a vital counter to some of the other groupings it is a part of, balancing out its stated policy of pursuing “multi-alignments”. It is a platform also for alignments on issues such as energy security, connectivity, and trade.