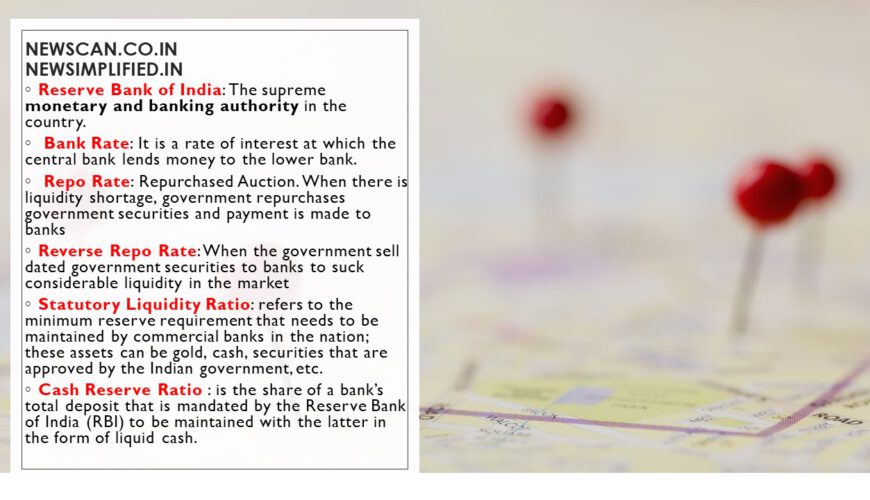 The Reserve Bank of India (RBI) raised the repo rate – at which it lends money to commercial banks – by 40 basis points to 4.4%.

The RBI also announced a 50 basis point increase,4.50 %, in the cash reserve ratio – the percentage of cash that banks need to keep in reserve against their total deposits – to suck out excess liquidity from the system.

The decision came amid soaring prices of food and fuel, with inflation at an 18-month high and higher global prices filtering through into India.

The Reserve Bank of India is the supreme monetary and banking authority in the country. It keeps the cash reserve of all scheduled banks and hence is known as Reserve Bank. It was established on April 1, 1935. Though originally privately owned, since nationalization in 1949, the Reserve Bank is fully owned by the Government of India. Its main function includes; formulating, implementing, and monitoring the monetary policy, prescribing broad parameters of banking operations within which the country’s banking and financial system functions, Managing the Foreign Exchange Management Act, 1999, Issues and exchanges or destroying currency and coins not fit for circulation, Banker to the Government: performs merchant banking function for the central and the state governments; also acts as their banker.

BANK RATE: It is a rate of interest at which the central bank lends money to the lower bank. It is a quantitative method of credit control.

REPO RATE:  Also known as repurchased auction. When there is a liquidity shortage, the government repurchases government securities, and payment is made to banks. It adds liquidity to the market. It simply means the repo rate is the rate at which RBI lends money to commercial banks against the pledge of government securities whenever the banks are in need of funds to meet their day-to-day obligations.

REVERSE REPO RATE: When the government sells dated government securities to banks to suck considerable liquidity in the market. Both repo and reverse repo rates are liquidity Adjustment Ratios (LAR).

DISINFLATION:  It refers to a situation in which prices are brought down moderately from its higher level without any adverse impact on production and employment.

MONETARY POLICY: Monetary policy is the macroeconomic policy laid down by the central bank. It involves the management of money supply and interest rate and is used by the government of a country to achieve macroeconomic objectives like inflation, consumption, growth and liquidity. Monetary policy can be expansionary and contractionary in nature. Increasing money supply and reducing interest rates indicate an expansionary policy. The reverse of this is a contractionary monetary policy.

To control inflation, the Reserve Bank of India needs to decrease the supply of money or increase the cost of funds in order to keep the demand for goods and services in control.

The tools applied by the policy impact the money supply in the entire economy, including sectors such as manufacturing, agriculture, automobile, housing, etc.

Banks are required to keep aside a set percentage of cash reserves or RBI approved assets. Reserve ratio is of two types:

Statutory Liquidity Ratio (SLR) – Banks are required to set aside this portion in liquid assets such as gold or RBI-approved securities such as government securities. Banks are allowed to earn interest on these securities, however it is very low.

When RBI sells government securities, the liquidity is sucked from the market, and the exact opposite happens when RBI buys securities. The latter is done to control inflation. The objective of OMOs are to keep a check on temporary liquidity mismatches in the market, owing to foreign capital flow.

Margin requirements – RBI prescribes a certain margin against collateral, which in turn impacts the borrowing habit of customers. When the margin requirements are raised by the RBI, customers will be able to borrow less.
Moral suasion – By way of persuasion, RBI convinces banks to keep money in government securities, rather than certain sectors.
Selective credit control – Controlling credit by not lending to selective industries or speculative businesses