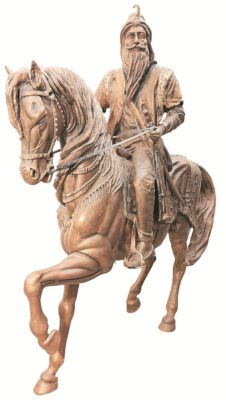 Maharaja Ranjit Singh (1780–1839), childhood name is Budh Singh, was founder of the Sikh empire who forged a modern empire of toleration and who famously owned the Koh-i-Noor diamond; and also has been voted the greatest leader in world history in a poll by BBC World Histories Magazine.

Born: 13 November 1780 in Gujranwala (in modern Pakistan), Known as Punjab Kesari or Sher-E-Kaum

Misalder (chief) of Sukerchakia Misl ,  and founding Maharaja of the Sikh empire for 38 years from 1801 to his death in 1839

Coronation: Proclaimed himself Maharaja of the Sikh empire on 12 April 1801 after his conquest of Lahore

By 1849, after two Anglo-Sikh wars, Ranjit Singh’s former empire was incorporated into the  British empire.

1809 Treaty of Amritsar with Britishers; Sutlej was fixed as the eastern boundary of his  Kingdom

Four provinces of his Kingdom; Lahore, Multan ,Kashmir and Peshawar

Named his government as Sarkar-i-Khalsa

Considered himself as Ranjit Nagara(Spokesman of Guru Gobind Singh Ji)

He was given the title Lion of Punjab (Sher-e-Punjab) because he stemmed the tide of Afghan invaders in Lahore, which remained his capital until his death. His general Hari Singh Nalwa built the Fort of Jamrud at the mouth of the Khyber Pass, the route the foreign rulers took to invade India

He was responsible for the Gold Plating of Sri Harminder Sahib, in Amritsar; he built Takht Sri Patna Sahib, the birthplace of the Guru Gobind Singh Je and Takht Sri Hazur Sahib, where the Guru left his worldly body.