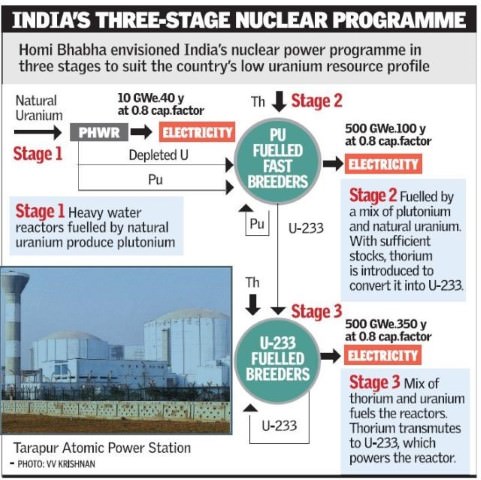 Recently, KAPP-3,  attained criticality, is India’s first 700 MWe unit, and the biggest indigenously developed variant of the Pressurised Heavy Water Reactor– criticality’ — a term that signifies the initiation of a controlled but sustained nuclear fission reaction. Until now, the biggest reactor size of indigenous design was the 540 MWe PHWR.

The PHWRs, which use natural uranium as fuel and heavy water (deuterium oxide D2O) as moderator, The heavy water coolant is kept under pressure, allowing it to be heated to higher temperatures without boiling.

Additionally, the 700 MWe PHWR design has enhanced safety through a dedicated ‘Passive Decay Heat Removal System’, which can removing decay heat (released as a result of radioactive decay) from the reactor core without requiring any operator actions. This is on the lines of similar technology adopted for Generation III+ plants to negate the possibility of a Fukushima-type accident that happened in Japan in 2011.

It is equipped with a steel-lined containment to reduce any leakages, and a containment spray system to reduce the containment pressure in case of a loss of coolant accident.

Reactors are the heart of an atomic power plant, where a controlled nuclear fission reaction takes place that produces heat, which is used to generate steam that then spins a turbine to create electricity.

Everything around you is made up of tiny objects called atoms. Most of the mass of each atom is concentrated in the center (which is called the nucleus), and the rest of the mass is in the cloud of electrons surrounding the nucleus. Protons and neutrons are subatomic particles that comprise the nucleus.

Under certain circumstances, the nucleus of a very large atom can split in two. In this process, a certain amount of the large atom’s mass is converted to pure energy following Einstein’s famous formula E = MC2,

Fission is a process in which the nucleus of an atom splits into two or more smaller nuclei, and usually some byproduct particles. When the nucleus splits, the kinetic energy of the fission fragments is transferred to other atoms in the fuel as heat energy, which is eventually used to produce steam to drive the turbines. For every fission event, if at least one of the emitted neutrons on average causes another fission, a self-sustaining chain reaction will take place. A nuclear reactor achieves criticality when each fission event releases a sufficient number of neutrons to sustain an ongoing series of reactions.

There are two fundamental nuclear processes considered for energy production: fission and fusion.

Fission is the energetic splitting of large atoms such as Uranium or Plutonium into two smaller atoms, called fission products. To split an atom, you have to hit it with a neutron. Several neutrons are also released which can go on to split other nearby atoms, producing a nuclear chain reaction of sustained energy release. This nuclear reaction was the first of the two to be discovered. All commercial nuclear power plants in operation use this reaction to generate heat which they turn into electricity.

Fusion is the combining of two small atoms such as Hydrogen or Helium to produce heavier atoms and energy. These reactions can release more energy than fission without producing as many radioactive byproducts. Fusion reactions occur in the sun, generally using Hydrogen as fuel and producing Helium as waste.