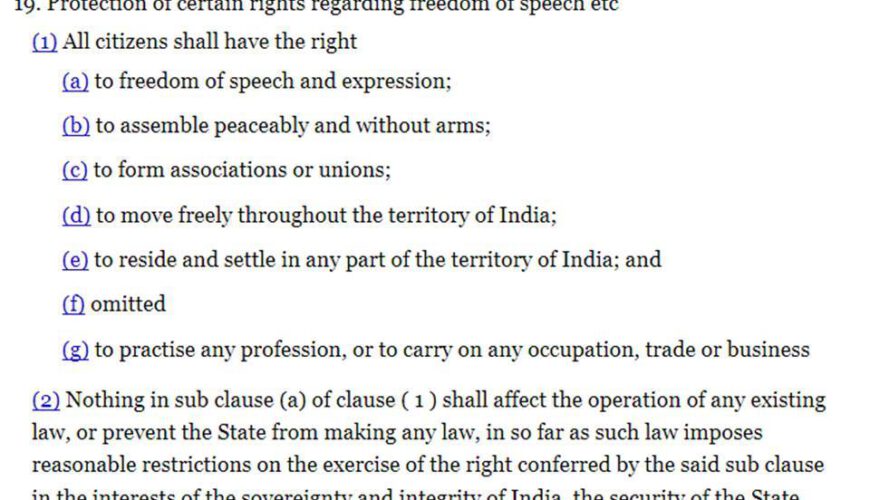 The Supreme Court on Saturday said that a person’s fundamental right to reside and to move about freely anywhere in India(Art 19(d)(e)) cannot be refused on “flimsy grounds” The bench of Justices Indira Banerjee and V Balasubramanian was hearing an externment order, issued by a deputy commissioner of police in Maharashtra against journalist Rahmat Khan. The order prohibited Khan from entering Maharashtra’s Amravati city for a year.

“A person cannot be denied his fundamental right to reside anywhere in the country or to move freely throughout the country, on flimsy grounds,” the bench said.

LEARNING FROM HOME/ FROM CLASSES/ BASICS   Article 19 in The Constitution Of India  The idea behind this article is to give voice to the Indian citizen the license to express thoughts with some reasonable restrictions. The principle behind freedom of speech and expressions is as under: (1) All citizens shall have the right (a) to freedom of speech and expression; (b) to assemble peaceably and without arms; (c) to form associations or unions; (d) to move freely throughout the territory of India; (e) to reside and settle in any part of the territory of India; and (f) omitted (g) to practise any profession, or to carry on any occupation, trade or business (2)  Imposes reasonable restrictions on the exercise of the right conferred by the said sub clause in the interests of the sovereignty and integrity of India, the security of the State, friendly relations with foreign States, public order, decency or morality or in relation to contempt of court, defamation or incitement to an offence                                Although Article 19 does not express provision for freedom of protest but the fundamental right of the freedom of protest implicit in the right the freedom of speech and expression.