Every year September 16 is marked as the International Day for the Preservation of the Ozone Layer. This year, we celebrate 35 years of the Vienna Convention and 35 years of global ozone layer protection.

On December 19, 2000, the United Nations General Assembly designated the day in remembrance of the date in 1987 when nations signed the Montreal Protocol on Substances that Deplete the Ozone Layer.

The ozone layer, a delicate layer of gas, shields the Earth from the harmful rays of the sun. The celebrations are also known as World Ozone Day.

The theme announced by the UN Environment Programme for International Day for the Preservation of the Ozone Layer 2022 is ‘Global Cooperation Protecting Life on Earth‘.

The United Nations urges the citizens of the world to show support the Kigali Amendment to the Montreal Protocol, which came into force on January 1, 2019. According to the Kigali Amendment, by phasing down hydrofluorocarbons (HFCs), which are potent climate-warming gases, the world can avoid up to 0.4 degree Celsius of global temperature rise by the end of the century, while continuing to protect the ozone layer.

Ozone is a form of oxygen. Oxygen occurs in three different forms in the atmosphere; as oxygen atoms (O), as oxygen molecules (O2) and as ozone (O3).

Ozone’s unique physical properties allow the ozone layer to act as our planet’s sunscreen, providing an invisible filter to help protect all life forms from the sun’s damaging UV (ultraviolet)rays. Most incoming UV radiation is absorbed by ozone and prevented from reaching the Earth’s surface. Without the protective effect of ozone, life on Earth would not have evolved the way it has.

Ozone depletion occurs when the natural balance between the production and destruction of stratospheric ozone is tipped in favour of destruction.Although natural phenomenon can cause temporary ozone loss, chlorine and bromine released from synthetic compounds is now accepted as the main cause of a net loss of stratospheric ozone in many parts of the world since 1980.

The Montreal Protocol, an international agreement signed by 197 countries aimed at healing the ozone layer. Heralded as a landmark environmental treaty – the first in UN history to achieve universal ratification.It seeks to cut the production and consumption of ozone depleting substances in order to protect the earth’s fragile ozone layer. It also aims at phase out HCFCs by 2030. Under this Protocol the first concrete step to save the Ozone layer was taken by immediately agreeing to completely phase out chlorofluorocarbons (CFC), Halons, Carbon tetrachloride (CTC) and Methyl chloroform (MCF) as per a given schedule.

Ultraviolet radiation is the one form of radiant energy coming out from the sun. The sun emits a range of energy known as the electromagnetic spectrum. The various forms of energy, or radiation, are classified according to wavelength. The shorter the wave-length, the more energetic the radiation. In order of decreasing energy, the principal forms of radiation are gamma rays, x-rays, UV (ultraviolet radiation), visible light, infrared radiation, microwaves, and radio waves. Ultraviolet, which is invisible, is so named because it occurs next to violet in the visible light spectrum. The three categories of UV radiation are :

Of these UV-B and C being highly energetic and are dangerous to life on earth. UV-A being less energetic is not dangerous. Fortunately, UV-C is absorbed strongly by oxygen and also by ozone in the upper atmosphere. UV-B is also absorbed by ozone layer in the Stratosphere and only 2-3% of it reaches the earth’s surface. The ozone Layer, therefore, is highly beneficial to plant and animal life on earth in filtering out the dangerous part of sun’s radiation and allowing only the beneficial part to reach earth. Any disturbance or depletion of this layer would result in an increase UV-B and UV-C radiation reaching the earth’s surface leading to dangerous consequences. Increased penetration of solar UV-B radiation is likely to have profound impact on human health with potential risks of eye diseases, skin cancer and infectious diseases. 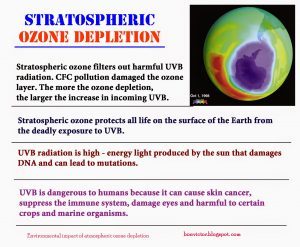