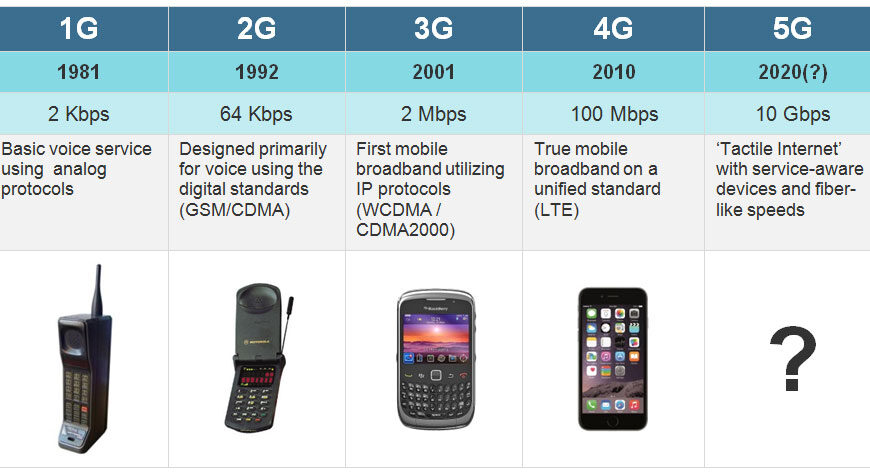 Fifth-generation wireless technology is capable of delivering ultra-low latency (the speed at which signals travel between your phone and the tower) and multi-Gbps data speeds.

5G technology is capable of working in the “sub-6 band” which is mostly frequencies between 3Ghz-6Ghz. This is where most of the current electronic devices like mobiles, tablets and even laptops work as it offers a wider reach.

It is said there are five technologies/Pillars that make up the foundation of 5G technology:

The Five Pillars of 5G Technology

Millimeter-wave 5G acquires huge chunks of data which allows it to data transfer speeds in excess of 1Gbps.This form of technology is currently being used in the US by telecom operators like Verizon and AT&T.

The second pillar of 5G is speed cells. Millimeter-wave struggles with range which is where speed cells come into play. Since mmWave cannot travel through obstacles, mini cell towers are deployed in large numbers across an area to relay the signal from the main cell tower.These small cells have to be placed in close proximity compared to traditional towers to make sure the users get uninterrupted 5G signals.

Next up there is maximum MIMO which stands for multiple-input & multiple-output technology. This technology is used on large cell towers to manage heavy traffic. A regular cell tower that distributes 4G comes with 12 antennas that handle all of the cellular traffic in the area.MIMO can support 100 antennas at the same time which increases the overall capacity of the tower to handle more traffic. This technology helps make the delivery of 5G signals smoother.

Beamforming is a technology that can regularly monitor multiple sources of frequencies and then switch to a stronger and faster tower if one signal is blocked. This ensures that specific data is sent only in a specific direction. Something like a traffic light for data.

Full-duplex is a technology that allows a node to transmit and receive data simultaneously in the same frequency band. Landline telephones and short-wave radio use this kind of technology. It’s like a two-way street that allows equal traffic both ways.

Imagine downloading a full HD movie in under 3 seconds. That’s how fast downloads are with 5G. According to Qualcomm, 5G is capable of delivering speeds up to 20Gbps with a 100x increase in traffic capacity and network efficiency.

Also, with mmWave, you can even achieve latency of just 1ms which helps with immediate connection establishment and that subsequently reduces network traffic.

This tech is also going to be the foundation for virtual reality, autonomous driving and the internet of things.

This will not only make your smartphone experience better but will also open up avenues for advancements in other fields like medical, infrastructure and even manufacturing.

Deploying 5G technology is costly which means that network operators will have to tear down their current ecosystem because it needs a frequency beyond 3.5Ghz which is a bigger bandwidth than what 3G or 4G use.

Sub-6 GHz spectrum has limited bandwidth and therefore its speeds could potentially be slower than what mmWave has to offer.

Also, mmWave is only effective in shorter distances and cannot travel through obstacles. It also tends to get absorbed by trees and even rainfall which means you’ll need a lot of hardware deployment in order to make 5G work effectively.