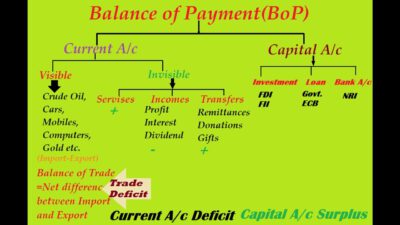 The above article talks about the emerging challenge faced by the Indian economy due to the emerging fiscal deficit and current account deficit. The main points raised in the article are as follows:

In its latest ‘Monthly Economic Review’, the Ministry of Finance has painted an overall optimistic picture of the state of the domestic economy.

By giving the global uncertainties due to trade disruptions, export bans, and the resulting surge in global commodity prices —all of which will continue to stoke inflation — as long as the Russia-Ukraine conflict persists and global supply chains remain unrepaired, the report highlights two key areas of concern for the Indian economy: the fiscal deficit and the current account deficit (or CAD). The report states that “as government revenues take a hit following cuts in excise duties on diesel and petrol, an upside risk to the budgeted level of gross fiscal deficit has emerged”.

The report underscores the need to trim revenue expenditure (or the money government spends just to meet its daily needs). “Rationalizing non-capex expenditure has thus become critical, not only for protecting growth supportive capex but also for avoiding fiscal slippages,” it states. “Capex” or capital expenditure essentially refers to money spent towards creating productive assets such as roads, buildings, ports etc. Capex has a much bigger multiplier effect on the overall GDP growth than revenue expenditure.

A fiscal deficit is when a government’s total expenditures exceed the revenue that it generates (excluding money from borrowings). It is an indication of the total borrowings needed by the government. While calculating the total revenue, borrowings are not included. Generally, a fiscal deficit takes place either due to a revenue deficit or a major hike in capital expenditure. Capital expenditure is incurred to create long-term assets such as factories, buildings, and other development. A deficit is usually financed through borrowing from either the central bank of the country or raising money from capital markets by issuing different instruments like treasury bills and bonds.

S.S Tarapore, recommended a CAD, of sustainable level, 3% of GDP while working with the Committee on Fuller Capital Account Convertibility.

Current account transactions that involve exports and imports of goods and services (services are incorporated under invisible). And

and export and imports of invisible (including services, remittances and income).

(2) Remittances (private remittances from abroad and payments to foreign countries)

(3) Income (income earned by MNCs from their investment in India).

Capital account transactions that involve the flow of investable money to and from India.

A higher CAD is not necessarily bad if the bulk of it is on account of such imports that help exports and growth and is financed through the higher inflow of foreign direct investment. But the slowing economy and a growing CAD make a lethal combination. While the former would tend to discourage foreign capital inflows, the latter would have a cascading impact on inflation and the competitiveness of Indian exports.

The imperative in the immediate term would be to identify all such imports that do not aid growth or investment and bring measures to curb them – gold, obviously, should top that list-quotas, or duties (though these may indirectly limit exports as well), or subsidizing exports, but these measures can be used for short term correction in case CAD goes out of hand but in the long run, as they distort the market and ultimately will adversely affect the exports as well. High imports could weaken the rupee, sap liquidity, turn away foreign investors, and slow down demand.

In the short to medium term, however, the focus must be on exports – identifying sectoral issues and bottlenecks and addressing them on a war footing. Fiscal reforms, an investment-friendly business environment, better infrastructure, and better technology increase the production activity with less cost making the exports competitive.

Moreover, it is also reduced by promoting an investor-friendly environment i.e. Foreign Direct Investment (FDI), and Foreign Institutional Investors (FII), the income from these foreign investments positively contributes to the current account.

It also requires reforms that reduce waste in government programs and improve the space for private innovation and enterprise. All such measures will improve productivity; increase the competitiveness of our exports and diversify the market for exports.