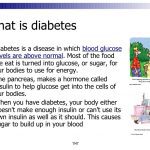 The latest findings of the Indian Council of Medical Research (ICMR)-India Diabetes (INDIAB) study, which was conducted over several rounds in 27 states (unified Andhra Pradesh), two Union Territories, and the National Capital Territory over the last decade, have highlighted the need for better control over various health parameters that influence mortality and quality of life.

Diabetes is a chronic disease that occurs when the pancreas is no longer able to make insulin, or when the body cannot make good use of the insulin it produces.

Insulin is a hormone made by the pancreas, that acts like a key to let glucose from the food we eat pass from the bloodstream into the cells in the body to produce energy. All carbohydrate foods are broken down into glucose in the blood. Insulin helps glucose get into the cells.

Not being able to produce insulin or use it effectively leads to raised glucose levels in the blood (known as hyperglycemia, diabetes mellitus). Over the long-term high glucose levels are associated with damage to the body and failure of various organs and tissues.

Type 2 diabetes used to be called non-insulin-dependent diabetes or adult-onset diabetes and accounts for at least 90% of all cases of diabetes. It is characterized by insulin resistance and relative insulin deficiency, either or both of which may be present at the time diabetes is diagnosed. It is often, but not always, associated with overweight or obesity, which itself can cause insulin resistance and lead to high blood glucose levels. People with type 2 diabetes can often initially manage their condition through exercise and diet. However, over time most people will require oral drugs and or insulin.

People with diabetes have an increased risk of developing a number of serious health problems. Consistently high blood glucose levels can lead to serious diseases affecting the heart and blood vessels, eyes, kidneys, nerves and teeth.

◼ Keep your blood sugar under 100 mg/dL and your glycerate blood glucose levels (HbA1c) below 5.7%.(an indicator of blood glucose control over past three months)

◼ Keep your blood pressure below 130/90 mm/Hg, using the medicine, if needed.

◼ Get cholesterol tested once a year. If high, take medicines to lower it.

◼ Walk fast, run, swim or play(activities that make you breathe harder)for at least one hour a day seven days a week.

The two main symptoms of diabetes insipidus are:

AVP plays a key role in regulating the amount of fluid in the body. It’s produced by specialist nerve cells in a part of the brain known as the hypothalamus. AVP passes from the hypothalamus to the pituitary gland where it’s stored until needed.