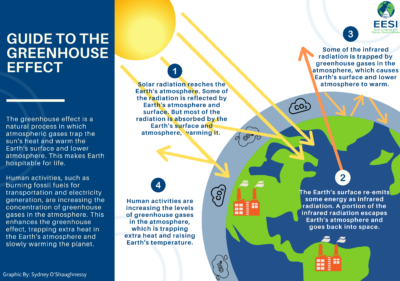 The Indian Institute of Technology (IIT) Bombay has signed a Letter of Agreement with the India Meteorological Department (IMD) to develop climate solutions. In a statement, IIT-B said that this collaboration is likely to work on the development of Sensors and Drone-based Smart Monitoring systems, Climate-smart agriculture technology for water and food security, Intelligent and automated early warning systems, and Smart power grid management.

ANTHROPOGENIC CLIMATE CHANGE is a change caused by human activity.

CLIMATE CHANGE:  Climate Change refers to any change in climate over time whether due to natural variability or as a result of human activity.              The term is commonly used interchangeably with global warming and greenhouse effects and refers to the increasing concentration of greenhouse gases in the atmosphere that traps the sun’s heat and causes changes in weather patterns on a global scale.

Global warming is the long-term heating of Earth’s climate system observed since the pre-industrial period (between 1850 and 1900) due to human activities, primarily fossil fuel burning, which increases heat-trapping greenhouse gas levels in Earth’s atmosphere. The term is frequently used interchangeably with the term climate change, though the latter refers to both human- and naturally produced warming and the effects it has on our planet.

The UNFCCC entered into force on 21 March 1994. Today, it has near-universal membership. The 197 countries that have ratified the Convention are called Parties to the Convention.

The UNFCCC is a “Rio Convention”, one of three adopted at the “Rio Earth Summit” in 1992. Preventing “dangerous” human interference with the climate system is the ultimate aim of the UNFCCC. The ultimate objective of the Convention is to stabilize greenhouse gas concentrations “at a level that would prevent dangerous anthropogenic (human-induced) interference with the climate system.”

Unlike the Kyoto Protocol which requires only developed countries to take mandatory actions, the Paris Agreement mandates all countries to take action to minimize the impact of climate change as per their voluntary commitments and individual capacity.

It sets a global goal of keeping global average temperatures from rising 2°C (compared to temperatures of pre-Industrial Revolution) by the end of the century.

It sets a nonbinding agreement for countries to reach peak greenhouse gas emissions “as soon as possible.”It asks richer countries to help out poorer countries: to give them capital to invest in green technologies, but also to help them brace for a changing world.

The Paris Agreement requires all Parties to put forward their best efforts through “nationally determined contributions” (NDCs) and to strengthen these efforts in the years ahead.

Governments agreed to strengthen societies’ ability to deal with the impacts of climate change;  provide continued and enhanced international support for adaptation to developing countries.

The agreement also recognizes the importance of averting, minimizing and addressing loss and damage associated with the adverse effects of climate change.