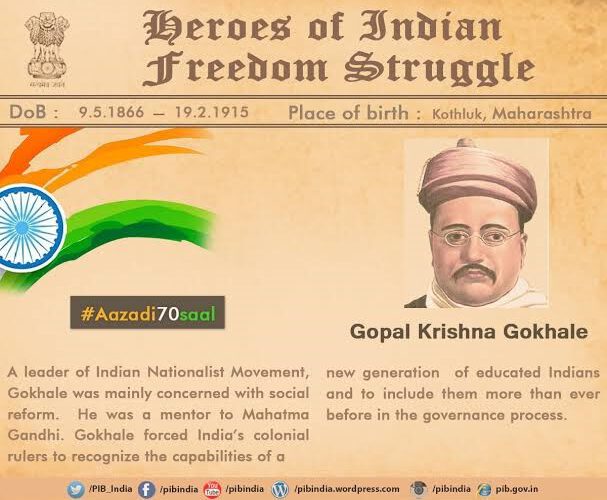 Gopal Krishna Gokhale, (born May 9, 1866—died Feb. 19, 1915), was an Indian liberal political leader and a social reformer during the Indian Independence Movement.

His political affiliation was Indian National Congress(INC). He led the moderate faction, within the INC, in the early years of the Indian independence movement. Gokhale advocated moderate and constitutional methods of agitation and gradual reform. Three years later he was elected president of the Congress in 1905. Gokhale represented a moderate faction of the Congress, who advocated for more autonomy within British rule and advocated constitutional methods as a means of achieving political reform

Gokhale’s deep concern with social reform led him to found the Servants of India Society (1905), whose members took vows of poverty and lifelong service to the underprivileged. He opposed the ill-treatment of untouchables or low-caste Hindus.

Gokhale’s deposition before the Welby Commission on the financial condition of India won him accolades. His speeches on the budget in the Central Legislative Council were unique, with thorough statistical analysis. He played a leading role in bringing about Morley-Minto Reforms in India.

Gokhale was famously a mentor to Mahatma Gandhi in the latter’s formative years., In his book, Gokhale: My Political Guru, Gandhi proclaimed his interactions with the former Indian National Congress president as ‘embracing the Ganges,’