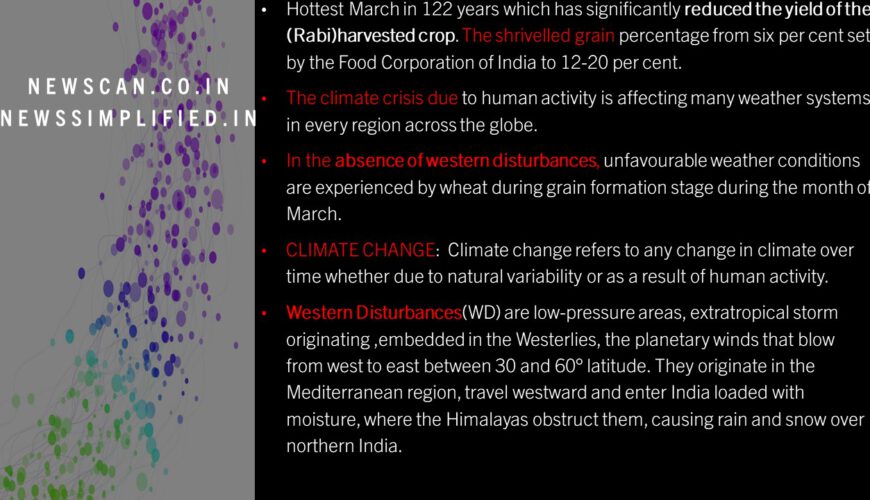 India saw its hottest March in 122 years which has significantly reduced the yield of the (Rabi)harvested crop.

Wheat is a temperature-sensitive crop that requires a cool temperature, especially in March when it is at its final stage. Extreme dry and hot weather prior to wheat harvest causes a condition known as terminal-heat stress, which wilts crops. The extreme heat in March and April has increased the shriveled grain percentage from six percent set by the Food Corporation of India to 12-20 percent.

Also, the climate crisis due to human activity is affecting many weather systems in every region across the globe, said the landmark Code Red scientific report released in August 2021 by the Intergovernmental Panel on Climate Change. India will suffer more frequent and intense heatwaves, the report by the United Nations body of climate experts predicted.

Moreover Western disturbances, specifically the ones in winter, bring moderate to heavy rain in low-lying areas and heavy snow to mountainous areas of the Indian Subcontinent.They are the cause of most winter and pre-monsoon season rainfall across northwest India. Precipitation during the winter season has great importance in agriculture, particularly for the rabi crops.

LEARNING FROM HOME/ WITHOUT CLASSES/BASICS

CLIMATE CHANGE:  Climate change refers to any change in climate over time whether due to natural variability or as a result of human activity. The term is commonly used interchangeably with global warming and green house effects and refers to increasing concentration of greenhouse gases in the atmosphere that traps sun’s heat causes changes in weather pattern on a global scale.

The principal forcing greenhouse gases are:

Western Disturbances(WD) are low-pressure areas, extratropical storm originating ,embedded in the Westerlies, the planetary winds that blow from west to east between 30 and 60° latitude. They originate in the Mediterranean region, travel westward and enter India loaded with moisture, where the Himalayas obstruct them, causing rain and snow over northern India. The moisture in these storms usually originates over the Mediterranean sea and Atlantic Ocean. WDs are important to the development of the Rabi crop in the northern subcontinent

They gradually travel across the middle-east from Iran, Afghanistan and Pakistan to enter the Indian sub-continent. Western Disturbances are low pressure systems, embedded in western winds (westerlies) that flow from west to the east.