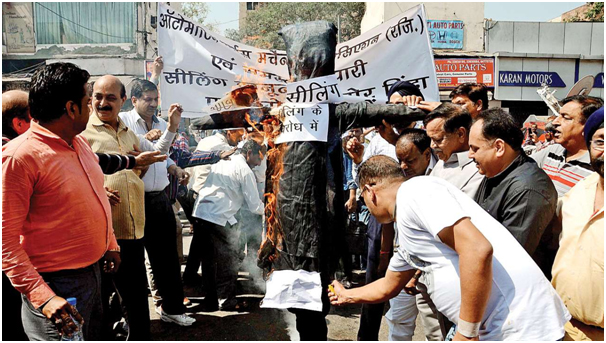 Hundreds of Trade Association Burned Effigies of Sealing, Observed Valentine Day as ‘My Valentine-My Shop’, Planning to take out car rallies, open their shops till midnight and Demands Reconstitution of NCR Board!

After the DDA approved the proposed amendment to the Master Plan 2021 for Delhi, which includes bringing an uniform floor-area ratio (FAR) for shop-cum-residence plots and complexes at par with residential plots. Hundreds of Trade Association burned Effigies of sealing in their respective markets across Delhi to lodge their strong protest against sealing of commercial establishments. Karol Bagh, Chandni Chowk, Sadar Bazar, Kamla Nagar, Kashmiri Gate, South Extension, Greater Kailash were among the places where effigies were burnt.

Innovative turn to the agitation: Adding the innovative turn to the agitation, the traders’ association is planning to take out car rallies on March 4 as part of their protest in various markets. They will also open their shops till midnight on March 8. CAIT secretary general, Praveen Khandelwal, said by closing the shops, the traders have demonstrated their resentment many times, but it would be for the first time, when they would open shutters till midnight.

They also observed February 14 as ‘My Valentine-My Shop’ to tell the authorities that it is their shop which they love the most.

Context: Civic bodies have undertaken the sealing drive initiated by a Supreme Court-appointed Monitoring Committee on December 17 last year. The committee is sealing business establishments that are using residential properties for commercial purposes.

Commercial premises have been sealed for failing to deposit conversion charges according to provisions in Master Plan 2021.

Traders’ Demands: They demanded the Union government to bring an ordinance to stop sealing whereas on the other hand asked Delhi Chief Minister Arvind Kejriwal not to be a mute spectator and convene a one-day special session of Assembly and pass a Bill moratorium on Sealing and forward the same to Centre.

The association also demanded reconstitution of the NCR Board as it believes that it will resolve many issues.

“NCR Board was constituted in 1985, but it remained an ornamental institution. Its revival will certainly resolve many issues pertaining to Delhi,” said Praveen Khandelwal, Secretary General, CAIT.

Why an amendment to Master Plan is rejected: Speaking to Media, Confederation of All India Traders (CAIT) Secretary General Praveen Khandelwal Said, “Repairing the old master plan is not a solution now. At a time when new master plan is due in year 2021, all efforts must be towards drafting a fool proof master plan for structured development of Delhi and on the other side strengthening the concept of NCR region for off loading Delhi from growing population. NCR board was constituted in 1985 but it remained an ornamental Institution. The NCR Board, therefore should be reconstituted.”