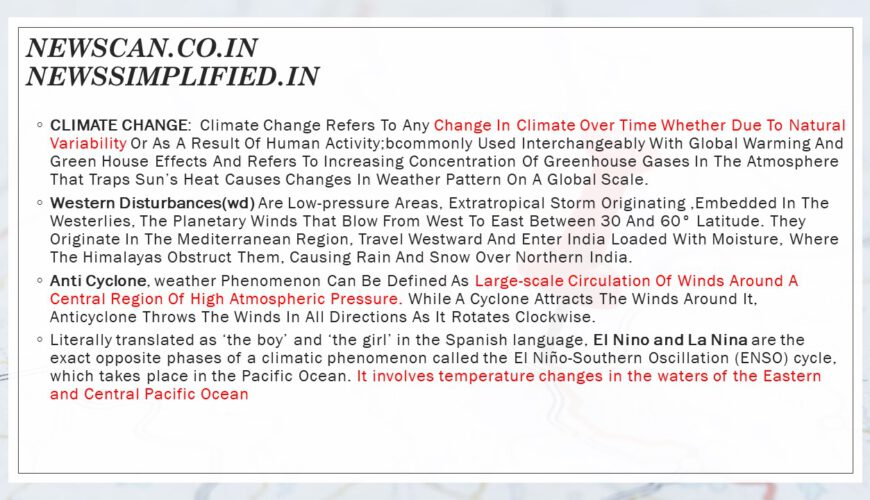 India , in the current summer,  has been battling probably the worst heatwave in its history.

Other Parameters linkages with Climate Change in India

Climate change has led to dynamic changes in the pattern of Western Disturbance(WD). Although the frequency of WD has increased, it has not translated to the precipitation associated with them; they are very crucial in the summer season as they are known to suppress heatwave conditions in the Indo-Gangetic plains.

The formation of anticyclones was nothing abnormal as they usually develop over Northwest India during summers. However, it is the longer persistence of these anticyclones that exaggerated the heatwave conditions in India. This is another indirect impact of changing climatic conditions.

Above normal temperatures across the Arctic region is a major cause of concern as it directly impacts the circulations affecting the Asia region. If the Arctic heatwave continues, we might see a greater number of hotter days quite early in the season, with their potential impact on WDs.

Qualitatively, heatwave is a condition of air temperature which becomes fatal to human body when exposed. Quantitatively, it is defined based on the temperature thresholds over a region in terms of actual temperature or its departure from normal. The Indian Meteorological Department (IMD) has given the following criteria for Heat Waves :

ANTHROPOGENIC CLIMATE CHANGE is a change caused by human activity.

CLIMATE CHANGE:  Climate Change refers to any change in climate over time whether due to natural variability or as a result of human activity.

Global warming is the long-term heating of Earth’s climate system observed since the pre-industrial period (between 1850 and 1900) due to human activities, primarily fossil fuel burning, which increases heat-trapping greenhouse gas levels in Earth’s atmosphere. The term is frequently used interchangeably with the term climate change, though the latter refers to both human- and naturally produced warming and the effects it has on our planet.

The UNFCCC entered into force on 21 March 1994. Today, it has near-universal membership. The 197 countries that have ratified the Convention are called Parties to the Convention.

The UNFCCC is a “Rio Convention”, one of three adopted at the “Rio Earth Summit” in 1992. Preventing “dangerous” human interference with the climate system is the ultimate aim of the UNFCCC. The ultimate objective of the Convention is to stabilize greenhouse gas concentrations “at a level that would prevent dangerous anthropogenic (human induced) interference with the climate system.”

It sets a global goal of keeping global average temperatures from rising 2°C (compared to temperatures of pre-Industrial Revolution) by the end of the century.