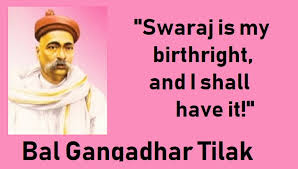 One of the stalwarts of India’s freedom movement, Bal Gangadhar Tilak also reverently addressed as Lokmanya (or “Beloved of the people”) was born in Ratnagiri, Maharashtra on July 23, 1856. He passed away on August 1, 1920.

A prominent social reformer, lawyer, teacher, journalist and an Indian Nationalist; In the 1880s, Tilak founded The Deccan Education Society which still runs institutions in Pune like the Fergusson College. He is known for his famous quote ” Self Rule is our birthright, and We shall have it!In 1916 he founded the All India Home Rule League in 1916-18 .

He was called the ‘Father of Indian unrest movement’ by the British for his successful attempts in uprising the masses towards freedom. He was one of the first activists who came up with the concept of ‘Swaraj‘. In 1880, Bal Gangadhar Tilak started his own newspaper, Kesari.

He wrote many books on Indian culture, history and Hinduism like The Orion or Researches into the antiquities of the Vedas (1893), Arctic Home in the Vedas, Geeta rahasya and others. His book “Gita-Rahasya” was written by him during six years imprisonment in Burma .

Tilak was not in favour of Mahatma Gandhi strategy of non-violent protest. . Tilak was the ‘Bal’ in the triumvirate Lal, Bal, Pal who advocated the Swadeshi movement involving the boycott of all imported items and the use of Indian-made goods in 1907 during the anti-Partition agitation in Bengal which began in 1905. Lal being Lala Lajpat Rai and Bipin Chandra Pal was the third leader.

In 1894, Tilak called towards celebrating the domestic Ganesha festival as public event. His intention again was to unite people through the fervour of the festival. Events like the Ganapati festival and Shiv Jayanti were used by Tilak to build a national spirit  in opposition to colonial rule.