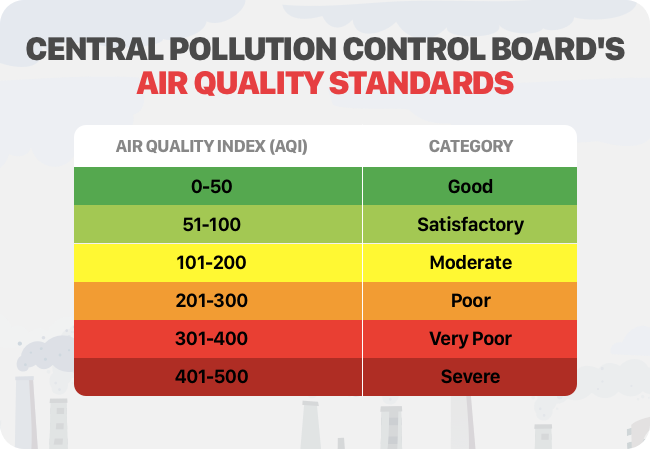 The air quality and pollution city tracking service from IQAir, a Switzerland-based climate group that is also a technology partner of the United Nations Environmental Program, has shown that there are as many as three cities from India on the list of ten cities with the worst air quality indices.

The ten cities with the worst air quality indicators and pollution rankings, according to IQAir:

It  is a  time bound national level strategy for pan India implementation to tackle the increasing air pollution problem across the country in a comprehensive manner .

PM2.5 means particulate matter in the air – caused by motor exhaust or anything combustible – that is less than 2.5 micrometers. Fine particulate matter (PM2.5) is an air pollutant that is a concern for people’s health when levels in air are high

Airborne particles are sometimes referred to as ‘particulate matter’ or ‘PM’. They include dust, dirt, soot, smoke, and liquid droplets. Some particles are emitted directly into the air from a variety of sources that are either natural or related to human activity. Natural sources include bushfires, dust storms, pollens and sea spray.

INDIA’S STANDARD FOR LEVEL OF POLLUTION

India has set standards for what it thinks are appropriate warnings for a particular level of pollutant. AQI help in comparing pollution levels at a glance with a colour code and a numerical value. In India, AQIs are determined based on the concentrations of seven pollutants, including PM2.5 (fine, respirable particles), sulphur dioxide (SO2), nitrogen dioxide (NO2) and carbon monoxide (CO).There are six AQI categories, namely: Good, Satisfactory, Moderately polluted, Poor, Very poor and Severe.