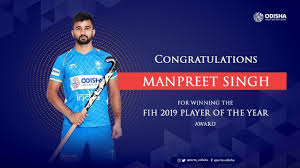 India’s men’s hockey team captain Manpreet Singh on  became the first Indian to win the International Hockey Federation’s (FIH) Player of the Year award, capping a memorable 2019 season in which he led the side to Olympic qualification.

He  became the first from the country to win the accolade since the awards were introduced in 1999. He beat competition from Belgium’s Arthur van Dorren and Lucas Villa of Argentina, who came second and third respectively.