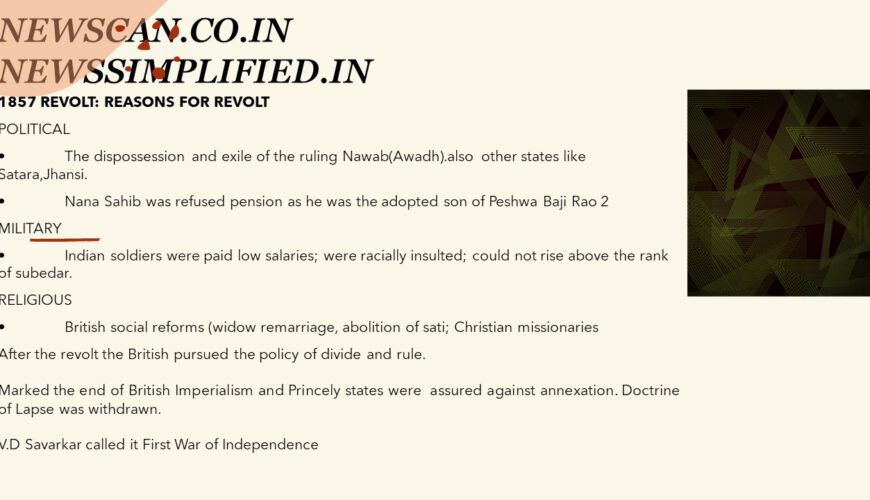 The revolt of May 10, 1857, during the British rule in India, began as a mutiny by the sepoys in the cantonment of Meerut and then the uprising spread swiftly to the ordinary people in the town and the surrounding villages through the entire Gangetic plain.

Awadh was a major center of the revolt; the undermining of the powerful taluqdar class, and the grievances of the soldiers of the Bengal army, many of whom were recruited from Awadh, all added up to general disaffection in the region.

29 March 1857:Mangal Pandey killed his British Commander and was hanged at Barrackpore.

The reason that triggered the mutiny was Rumour, that circulated in north India. The sepoys in the cantonments believed that the cartridges of the Enfield rifle were coated with the fat of cows and pigs.

The overthrow of British rule and the restoration of the traditional ruling powers was the main aim of the rebels. The revolt was suppressed by the British by force of arms, often after a bitter struggle. The British slowly regained control by steadily re-conquering portions of territory

The suppression of the revolt of 1857 brought about major changes at the level of administration. The fiction that the English East India Company ruled India was brought to an end and India was brought directly under the Crown. The India Act of 1858 made it clear that India would be governed by and in the name of the Crown. The latter would act through a secretary of state who would be aided by a council of 15 members. In India, the central administration was vested in the hands of the Governor-General in Council. But by the Royal Proclamation of November 1, 1858, the Governor-General was given the exalted title of Viceroy

After the revolt, the British pursued the policy of divide and rule.

Marked the end of British Imperialism and Princely states were  assured against annexation. The doctrine of Lapse was withdrawn.

V.D Savarkar called it the First War of Independence