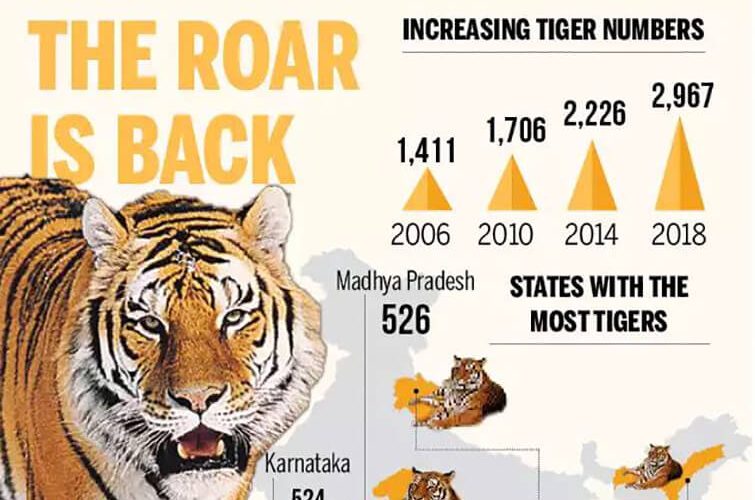 International Tiger Day is celebrated every year on 29 July to raise awareness for tiger conservation. The goal of the day is to promote a global system for protecting tiger’s natural habitats and raise public awareness. India is currently home to 70 percent of the world’s tiger population in over 17 states and 50 sanctuaries across the country.There are currently 13 tiger range countries — India, Bangladesh, Bhutan, Cambodia, China, Indonesia, Lao PDR, Malaysia, Myanmar, Nepal, Russia, Thailand and Vietnam.

The All India Tiger Estimation 2018 survey has entered the Guinness World Record for being the world’s largest camera trap wildlife survey. The survey was declared to the nation on the Global Tiger Day last year.

Traditionally eight sub-species of tigers have been recognized, out of which three are extinct. The Indian sub-species is Panthera tigris ; Bengal tiger.

The tiger is the largest member of the  (cat) family.Tigers are terminal consumers in the ecological food pyramid, and their conservation results in the conservation of all trophic levels in an ecosystem.

Project Tiger is a Centrally Sponsored Scheme of Government of India which was launched on the 1st of April, 1973 for in-situ conservation of wild tigers in designated tiger reserves. Project Tiger is being implemented in these States in collaboration with the respective State Governments.  The challenges include: protection against poaching, fragmentation of habitat, securing inviolate space for tiger to facilitate its social dynamics, addressing tiger-human interface, restoration of corridors and eliciting public support of local people by providing ecologically sustainable options.